RAMALLAH, April 5 (Xinhua) — The Palestinians insist that they will not accept the resumption of unconditioned peace talks with Israel, a senior official stated on Tuesday.

Erekat was responding to Israeli Prime Minister Benjamin Netanyahu’s earlier remarks that he invites Palestinian President Mahmoud Abbas for a meeting to study ending incitement between the two sides.

“In case the meeting is held, Netanyahu should first announce an end of settlement, release prisoners arrested before signing Oslo peace accords in 1993 and recognize all the signed peace treaties between the two sides,” said Erekat.

He insisted that “If Netanyahu doesn’t do this, there will be no resumption of negotiations,” adding that “in relation to incitement, we know how to respond to it.”

Erekat accused Israel of waging a comprehensive war against the Palestinians, which includes a demolition of homes, lands confiscations, holding bodies of Palestinians and breaking into Palestinians’ holy places.

Here is a minor, but telling, detail from yesterday’s spectacular Panama Papers expose that concerns the PA’s former deputy prime minister and minister of national economy Mohammad Mustafa, who was described by Foreign Policy as “the most important man in the Palestinian economy.”

While the things revealed about Mustafa, mostly his relationship with the (British Virgin Islands-based) Arab Palestinian Investment (Holding) Company Ltd., APIC and the Palestine Investment Fund, do not point to any obviously illegal activities, his passport picture is interesting: 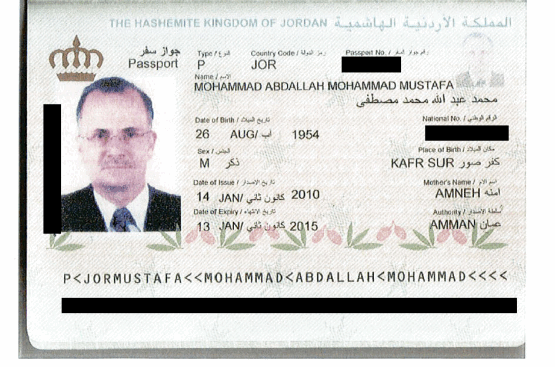 Mustafa uses a Jordanian passport, even though he was a deputy prime minister of “Palestine” at the time the passport was valid.

While Jordan has stripped citizenship from nearly all West Bank Palestinians, some well-connected officials managed to hang on to theirs.